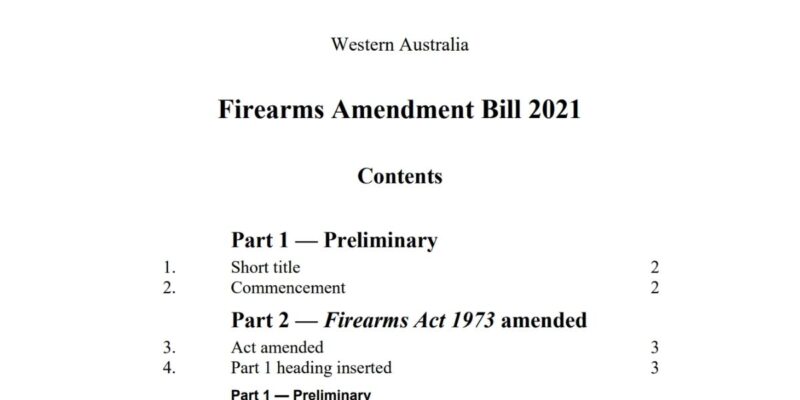 The Shooting Industry Foundation of Australia (SIFA) is calling on the State Government and WA Police to make changes to the Firearms Amendment Bill 2021 to limit the impact on law abiding Western Australians.

SIFA Executive Officer James Walsh said the industry fully supported the legislation’s intent of making it more difficult for unlicensed firearms to end up in the hands of bikies and unlawful individuals.

But there was concern that it would have a significant impact on licensed firearms holders in WA.

“Unfortunately, in putting the squeeze on bikies and unlawful individuals, this legislation has captured a number of everyday activities of licensed firearms holders which will add red tape, cost, inconvenience, and in some instances, criminalise these activities,” Mr Walsh said.

“We are keen to sit down with the WA Government and WA Police and work with them to design amendments which will ensure lawful firearms holders are not impacted by legislation targeted at bikies and criminal elements in the community.”

Some of the key industry concerns of the legislation are as follows:

“The industry is all for throwing the book at bikies and unlawful individuals, but the legislation currently before the Parliament will have a significant impact on the everyday activities of licensed firearms owners in WA,” Mr Walsh said.

“The Government and WA Police need to make sure this legislation hits its intended target and does not penalise hardworking and law-abiding citizens.”

Mr Walsh called on all WA MPs to apply the appropriate level of scrutiny to the legislation.

He said SIFA would support the establishment of a parliamentary committee to work through these issues and provide clarity and certainty for lawful firearms holders in WA.