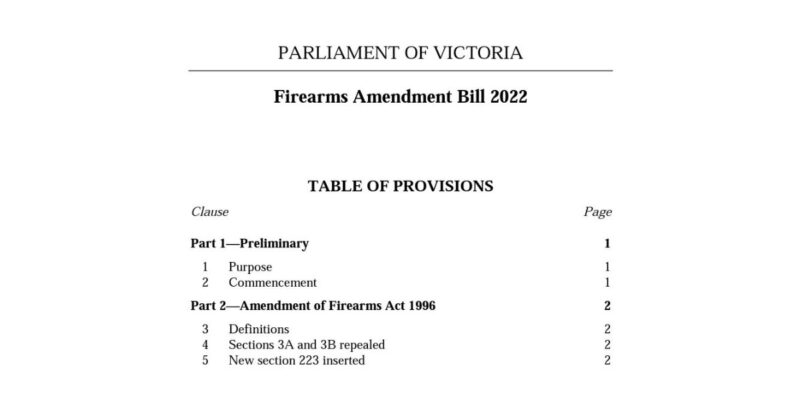 The Shooting Industry Foundation of Australia (SIFA) has written to Victorian MP’s requesting that they support the Firearms Amendment Bill 2022, that was introduced to the Victorian Parliament by Jeff Bourman of the Shooters, Fishers and Farmers Party.

This Bill seeks to improve the Firearms Act 1996, by removing the unnecessary subjective assessment of a firearms aesthetics for the purposes of categorisation.

SIFA has long been advocating that categorisation of firearms be based solely on objective technical assessment of fundamental engineering principles (i.e. actuation and ammunition type) as outlined in our publicly available position statement, Appearance Based Firearm Controls.

Subjective appearance-based controls cause enormous issues for our highly regulated and compliant shooting industry, as they remove the regulatory certainty that our industry relies on in order to trade.

Jurisdictional reclassification of firearms also moves Australia further away from the nationally consistent approach to firearms regulation as intended by the National Firearms Agreement.

SIFA has reminded politicians that there is no evidence that suggests firearm appearance laws increase public safety or reduce illicit gun crime, and given this, the only logical conclusion is that appearance provisions are redundant and should be removed.

By supporting the removal of appearance-based categorisation provisions, politicians would actually be upholding the intent of the National Firearms Agreement for industry, and better clarity for law enforcement.

SIFA’s letter to members of the Victorian parliament can be viewed here.