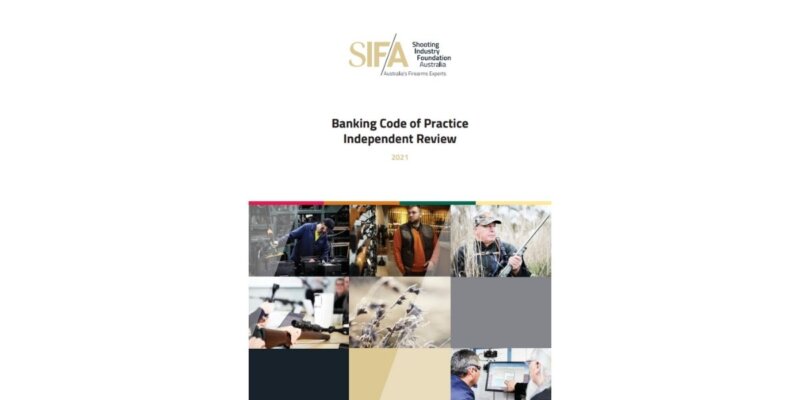 The Shooting Industry Foundation of Australia (SIFA) thanks the Australian Banking Association (ABA) for the opportunity to contribute to the Banking Code Review, 2021.

SIFA is the peak body representing the major importers and wholesalers of firearms and firearm related components in Australia, who service the Australian Defence, Law Enforcement and Civilian markets. The annual value of small arms and ammunition imports to Australia to March 2021 was A$772.3 million and exports over the same period was A$166.6 million.

The civilian sectors alone (hunting and target shooting) contributed $A2.4B to the Australian economy in 2019, supported an estimated 400 small businesses and more than 19,000 jobs.

In developing this submission, SIFA has considered.

It must be stated up front that SIFA views the Banking Code as an outstanding example of self-regulation. The ABA is to be congratulated for establishing the code in 1996 and for investing effort into ensuring that the code continues to reflect what can be a dynamic business and political environment.

1996 was also a pivotal year for the firearms industry in Australia as it saw the introduction of the National Firearms Agreement (the NFA) which established minimum standards for firearm regulation in Australia.

The industry is heavily regulated by the Commonwealth, States and Territories and has a very strong track record of compliance across all jurisdictions.

It is a legislated requirement that all firearm transactions be facilitated through licensed firearm dealers. Similarly, a business which retails ammunition must be appropriately licensed. Licensed dealers play a critical role in the regulation of firearms in Australia.

It is sadly not uncommon for SIFA to be contacted by firearm related small businesses which have been declined banking services by members of the ABA. SIFA’s advocacy efforts on behalf of these businesses has resulted in a 100% successful resolution rate, however such intervention should not be necessary. The question for the code review is why this situation occurs in the first place?

Our assessment of these situations has concluded that the root cause can most often be attributed to: